Shop our signed Wasps rugby memorabilia including a large collection of autographed items by the squad. Signed Wasps rugby shirts, jerseys, rugby balls and photos. Many with signing proof, all with free UK delivery, fast worldwide shipping and certificate of authenticity (COA)! 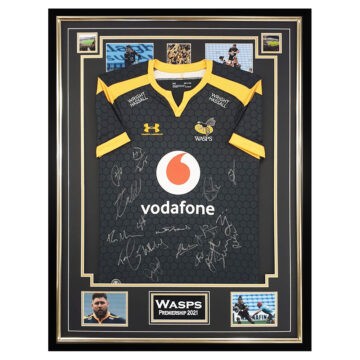 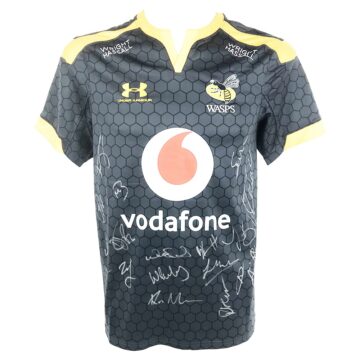 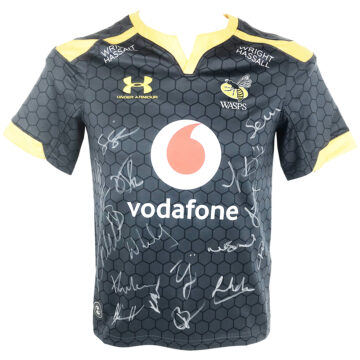 Wasps RFC is one of England’s most popular and well-known rugby clubs. Now based in Coventry but originally hailing from London they are one of the city’s most popular exports, with support reaching far and wide.

Wasps RFC was formed 152 years ago in London in 1867 – making it one of the very first rugby clubs to be founded in England. The team was eligible as one of the founder members of the RFU, and as such they went on to play in a variety of high-profile matches, hosting international clashes and tournaments.

During the 1996-1997 season ,Wasps turned professional and became the very first English champions of the new professional era. But it was in 1999 that things really started to get exciting for Wasps. This season oversaw multiple victories and near-misses – and a change in play due in part to the appointment of Shaun Edwards as coach.

In total Wasps have won a whopping 12 European titles. They have twice been European champions – in 2004 and 2007. On English soil Wasps have claimed six English Championships – including two successive wins between 2003 and 2005. They also won the European Rugby Challenge Cup in 2003.

The iconic Wasp logo and striking black and yellow strip has long been associated with the side. It was redesigned in 1999 to introduce a new era, and now features bright yellow and black wasp and iconic font synonymous with the agility and stinging successes of the squad.