Browse our signed Lewis Hamilton memorabilia including hand-signed Hamilton shirts and photos. All memorabilia comes with 100% authentic autographs, hologram certificate of authenticity, some with signing proof, free UK delivery & fast worldwide shipping. Give the gift of a legend, to the legend in your life. You can personalise each item with your choice of frame. 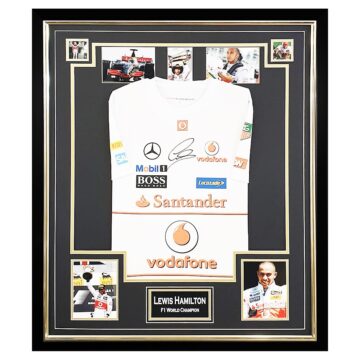 He’s one of the greatest and most celebrated racing drivers in the history Formula One – still in his prime aged just 33. F1 superstar Lewis Hamilton MBE is a force to be reckoned with – charting a career of successive wins and record-breaking achievements.

Born in 1985 in Stevenage, Hertfordshire, Hamilton’s interest in racing was inspired at a very early age. In 1991 his father bought him a radio-controlled car, giving him his first taste of racing competition. The following year he finished second in the national BCRA championship – beating a host of experienced adults for the runner-up position. As a result of his growing passion for racing cars, his father bought him a go-kart for Christmas when he was aged six. He motivated his son by telling him he’d support his racing career as long as he worked hard at school. Indeed this support was instrumental in Hamilton’s eventual success and star status – as his father worked up to three jobs at a time whilst attending every single race.

Hamilton’s go-karting career began at the age of 8. A chance meeting was to greatly influence his future success – as he approached Mclaren F1 team boss Ron Dennis for an autograph and told him “Hi, I’m Lewis Hamilton. I won the British Championship and one day I want to be racing your cars.” Dennis wrote ‘Phone me in nine years – we’ll sort something out then.’ True to his word, Dennis actually called Hamilton in 1998 following his Super One Series win and second British Championship triumph. The rest, as they say, is history.

Hamilton’s achievements over his short career to date are numerous – many of them ground-breaking. He has four Formula One Drivers Championship wins under his belt, along with 71 wins and 132 podiums. He was also crowned BBC Sports Personality of the Year in 2014 and GQ’s Sportsman of the Year two years on the trot in 2014 and 2015.

If you’re looking for signed Lewis Hamilton shirts, prints, photos and other memorabilia you’re in pole position. Whether you’re a Lewis Hamilton super fan or avid F1 collector, you’re sure to find something sensational here at Firma Stella. Our collection includes