Shop our signed Bradley Wiggins memorabilia featuring autographs by the great man on a number of cycling related items. From signed Bradley Wiggins jerseys & shirts to photos and mounted displays! Many with signing proof. All with a Certificate of Autehnticity (COA) free UK delivery & fast worldwide shipping! 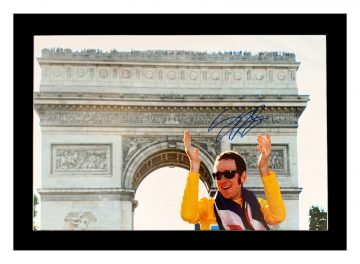 Pride of Britain (and English sporting hero) Sir Bradley Wiggins CBE is man who needs no introduction. The cycling star and Tour de France champion is now retired, but his legacy lives on as British cycling continues to be a source of great pride for the nation.

Wiggins (or ‘Wiggo’ as he is affectionately known as to fans and teammates) is thought of as a Great British icon – but he was in fact born in Belgium. His father is professional Australian cyclist Gary Wiggins – his mother Linda is British. The family moved back to England when Wiggins was two, and his interest in cycling was sparked after watching Chris Boardman win at the 1992 Olympic Games. He entered his very first race, the West London Challenge 92, aged just 12 years old. Even at this tender age he knew he was destined to become a cycling champion. “I told my art teacher, I’m going to be an Olympic champion, I’m going to wear the yellow jersey in the Tour.’ He promptly joined a cycling club, and over the years worked to make that prediction come true. In 2001 he turned professional and by 2004 he was racing for Great Britain under the mentorship of his childhood hero Chris Boardman.

Overall Wiggins’ record sheet is one of the most impressive in the history of cycling. He has many accolades and world records to his name – including his 2012 Tour de France win and double Olympic gold in Beijing. In 2016 he claimed his fifth Olympic gold and subsequently retired.

Known for his colourful personality and straightforward manner, Bradley Wiggins is characterised by his love of Mod culture – demonstrated by thick sideburns and his growing collection of motorcycles. In 2013 he was awarded the Most Excellent Order of the British Empire, a CBE.

Buy Bradley Wiggins signed memorabilia at Firma Stella. We’ve sourced a fantastic selection of items autographed by the cycling star – from photographs to mounted displays celebrating his illustrious career. All are independently verified and supplied with a certificate of authenticity.