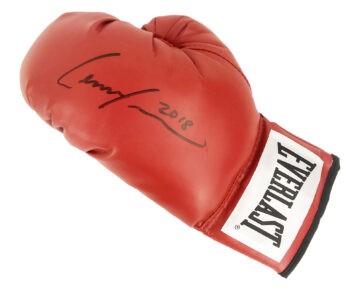 Lennox Lewis was born in 1965 in London, to Jamaican parents. He moved to Ontario in Canada aged 12. He excelled in a number of sports at High School in Canada where he played soccer, basketball and Canadian football. He played to a high standard and his School team won a basketball provincial championship in 1983. Simultaneously, Lewis took up boxing in around 1978. He decided boxing was his preferred sport and he went on to become a dominant amateur, and as we know became a world-renowned pro-boxer. Although he was 6 foot 5 inches tall and having an extremely strong punch, his coaches profess they had to strongly encourage him to convert this considerable advantage to aggression.

Lewis won gold in 1983 at the Junior World Championships. A year later in the 1984 Los Angeles Summer Olympics, he represented Canada in the super-heavyweight division. He reached the quarter-finals, losing to Tyrell Biggs, who went on to win gold. Lennox decided to remain as an amateur so he could fight at the next Olympics. He achieved his goal and went on to win the Gold medal at the 1998 Olympics, in Seoul. Lewis registered an impressive amateur record winning 85 and losing only 9 bouts, although HBO credit him with a slightly shorter amateur career.

In 1999 Lewis defeated Evander Holyfield to become undisputed heavyweight champion by unifying a number of titles (WBC, WBA, IBF and IBO). Lewis was later stripped of a number of titles when he chose not to fight suggested challengers. In 2002 he defeated Mike Tyson in an eagerly awaited contest. He then went on to defeat Vitali Klitschko in 2003 in a tough battle. Lewis retired the following year and vacated all of his world titles.

Lewis initially struggled to achieve popularity in his early career. He found it hard to earn the affection of the British public with his Canadian / British background. Lewis also found it difficult to please the American people too. Saying that, his reputation has increased since retirement. He now lives in Miami Beach with his wife and three children.