Shop for signed Uruguay team football memorabilia including football boots, shirts and autographed photographs. Most items come with a photo of the signing, All Uruguay signed items come with a certificate of authenticity, free UK delivery and fast worldwide shipping. 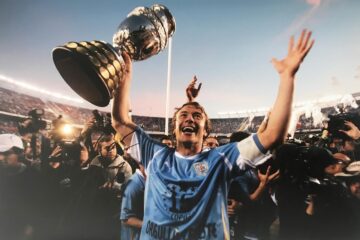 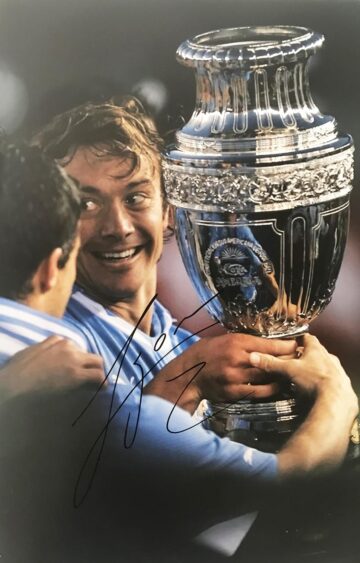 Football in Uruguay is a big deal. Unsurprisingly it is the country’s most popular sport, a passion which is reflected in the national team’s impressive resume of championship titles. The sport is a relatively new addition to Uruguayan culture, introduced by British immigrants in the late 1800s. The very first Uruguay club team to be formed was established by an English School teacher with the befitting title of Albion FC. As touring British clubs travelled the length and breadth of the country throughout the 20th century a love for the sport quickly developed.

South American football favourite Uruguay has been fierce contenders for international world cup titles since the tournament itself began. Their national team has won more international tournaments than any other country – a remarkable achievement. They possess two FIFA World Cup titles and two Olympic gold medals in the sport. The country also has a fierce footballing rivalry with geographical neighbours Argentina.

Uruguay may be small, but it’s big on achievement. Despite a modest population of just 3.4 million, it produces a healthy number of football stars who go on to play all over the world. Montevideo, the country’s capital, is widely regarded as the centre of its football culture. The two biggest top-flight teams in the country’s Primera Division are Penarol and Nacional. The national team has also won Copa America a record fifteen times, making it one of the tournament’s most successful teams.

Naturally, Uruguay signed football memorabilia is in high demand – thanks to the country’s incredible footballing achievements over the years and a plethora of high-profile world-class players. The Firma Stella range features a wide variety of unique and exclusive collector’s items, from signed Uruguay football boots and goalie gloves to shirts and mounted photographs. All are autographed by legends of the game and modern marvels including Luis Suarez, Juan Alberto Schiaffino, Diego Forlan and Alcides Ghiggia. Browse our authentic, fully certified collections today.