Shop our signed Venus Williams tennis memorabilia including tops, shirts, caps, balls, photos and tennis racquets. All of our autographs & signatures come with fast worldwide shipping, free UK delivery and a Certificate of Authenticity. Many have signing proof too! 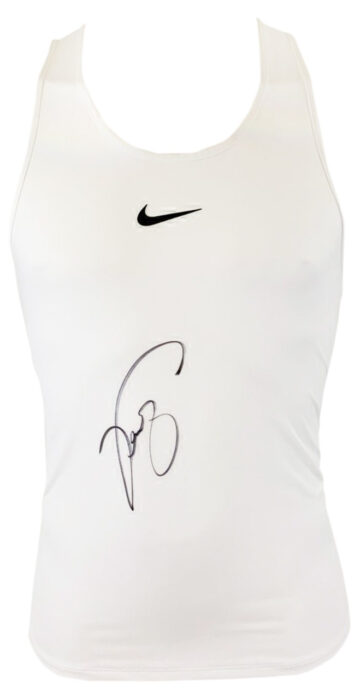 Venus Williams is widely regarded as one of tennis’ most pioneering players – a symbol of female empowerment, success and strength. She and her younger sister Serena have continually made waves throughout their illustrious careers, changing the shape of the sport for years to come.

Venus was born in California and started playing tennis at an early age. Her talented was soon spotted by a local professional player named Tony Chesta – and soon the family moved to West Palm Beach so that she and Serena could attend tennis academy there. Although both girls were coached for some time by Rick Macci, their father eventually pulled them out and mentored their tennis careers from home.

Venus made her professional debut in 1994, aged just 14. By 1997 she was experiencing increased success, making her Grand Slam debut and entering the top 10 within the space of just three years. Despite winning her first title in 1999, the years between 2000-2002 are widely regarded as her ‘golden era’ – along with sister Serena, Venus dominated the game, clinching four Grand Slam titles and two Olympic gold medals (in total she has four).

Despite the success there have been ups and downs – the majority caused by injuries. Venus has suffered with tendonitis in her wrists and ankles, forcing her to miss a number of events. Despite this she has continued to be a force to be reckoned with on the world stage of tennis, with 10 Grand Slam titles to her name including five wins at Wimbledon and two a piece at the Australian and US Opens. She also has fourteen doubles Grand Slam titles under her belt and spent 11 consecutive weeks ranked number one in female tennis. Venus is also the all-time leader (male or female) in Grand Slams played – in 2018 her total stood at 80.

Our collection of Venus Williams signed rackets, balls, tops, shirts, caps and other memorabilia offers a glimpse into the life and work of the celebrated tennis star. Here you’ll find a plethora of intriguing items autographed by the legend herself including clothing and tennis balls.