Shop our signed Saracens rugby memorabilia, autographed Saracens jerseys, shirts, rugby balls and photos, all signed by the team players. All of our items come with a certificate of authenticity (COA), free UK delivery and fast worldwide shipping! Many items have full signing proof! 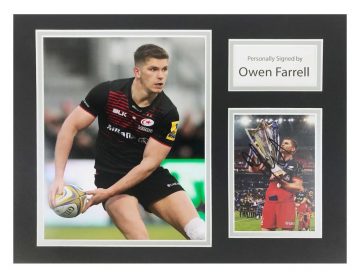 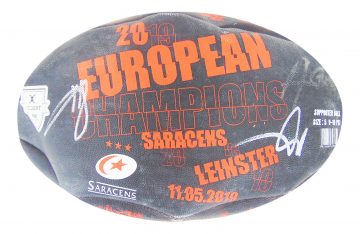 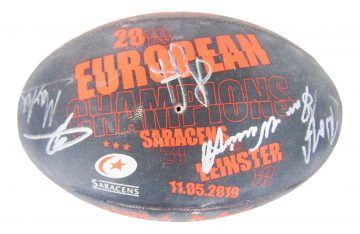 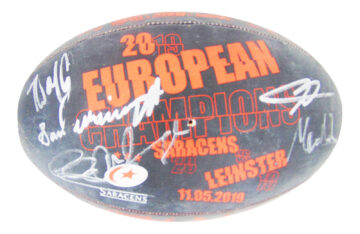 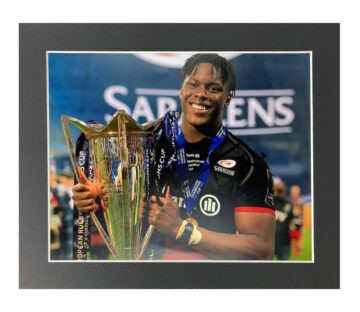 London’s Saracens are arguably one of England’s most prolific rugby union clubs. Renowned and respected throughout the UK, the Premiership side won the European Rugby Champions Club twice consecutively – winning the Aviva Premiership four times.

The club was founded in 1876 by the Old Boys of the Philological School in Marylebone. The unusual name is said to signify ‘endurance, enthusiasm and perceived invincibility of Saladin’s 12th century desert warriors.’ Over the years they enjoyed success but entered a dry spell during the 1980s which came to be a catalyst for the club’s future triumphs.

The Courage Leagues, in particular, proved to be a turning point – rising up to First Division within a couple of years. In recent years Saracens have enjoyed massive success – with no less than eight Championship wins to their name within the last decade. They were also runners-up in the Aviva Premiership, Heineken Cup and Guinness Premiership during this time. During the 2015/2016 season, Saracens became the first side to win a European Cup without losing a game.

Saracens have a wide-reaching following – but most fans hail from their native London. They are also affectionately known by adoring fans as the Serries, The Men In Black, Wolf Pack and Fez Boys. The club has various international connections – and in the summer of 2016/2017 the club had no less than six players selected for the British and Irish Lions Tour of New Zealand.

Fans and collectors can browse and buy Saracens rugby signed memorabilia here at Firma Stella. We’ve sourced a fantastic collection of signed Saracens shirts, rugby balls, photographs and artwork to commemorate the club’s fantastic achievements over the years. All items are 100% genuine, provided with a certificate of authenticity for complete peace of mind. Contact us for advice and guidance on taking care and making the most of your signed Saracens memorabilia.