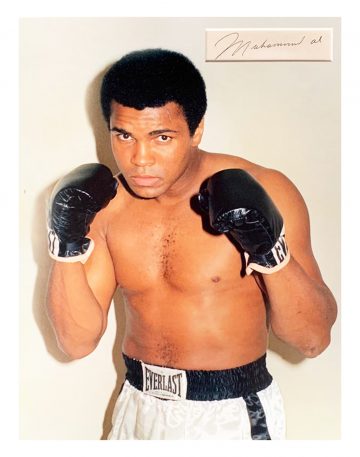 Cassius Marcelus Clay Junior was born in January 1942 in Louisville, Kentucky. He was one of six siblings and had four brothers and one sister. He was named after his father. He was a descendant of slaves of the Antebellum South and was of African descent, with small amounts of Irish and English heritage.

He was most commonly known as Muhammad Ali and was nicknamed ‘The Greatest’ or ‘Champ’. A true legend of a man, he was one of the most famous boxers of all time. He is widely acknowledged as one of the most influential sports figures of the 20th century. Ali was also well renowned as a philanthropist and activist. He was famous for his trash-talking and made a number of TV appearances with the likes of Michael Parkinson.

Ali began his amateur boxing career when he was just 12. He progressed quickly and won a gold medal in the 1960 Summer Olympics. in the light heavyweight division. Soon after, spurred on by his victory, he turned professional. Around the same time, he converted to Islam and became a Muslim. This is when he took the name Muhammad Ali. He won his first major heavyweight championship in 1964 when he created a huge upset. Ali defeated the heavily fancied Sonny Liston at the tender age of 22. This set him on his way to become one of the most famous boxers of all time.

Muhammad Ali caused controversy in 1966 when he refused to be drafted into the military to fight in the Vietnam War. He was excluded from the first drafts due to his dyslexia and sub-standard writing and spelling. By early 1966 the army lowered its standards to increase the numbers in Vietnam. Ali was arrested, found guilty of treason and all of his boxing titles were taken away from him. He appealed this and got it overturned four years later. Although he won the case, he was unable to box during this period. Being a ‘conscientious objector’ made him a high-profile figure of racial pride for African Americans. This was especially significant during the civil rights movement.

Ali was involved in a number of historic boxing matches that are still revered to this day. These include the Thriller in Manila with Joe Frazier and the Rumble in the Jungle with George Foreman. The latter was referred to as ‘arguably the greatest sporting event of the 20th century’. It was watched by an estimated one billion people worldwide. This makes it the most-watched live TV broadcast of all time.

He remained an active public figure for a number years after his retirement from boxing. These became increasingly infrequent as his Parkison’s took hold and his condition worsed. He sadly passed away in 2016.