Shop our collection of signed Scotland football memorabilia including signed Scottish international football shirts from the best Scottish footballers.  Each item comes with free UK delivery, a certificate of authenticity and worldwide shipping!  You can be assured your autographed shirt is 100% genuine. 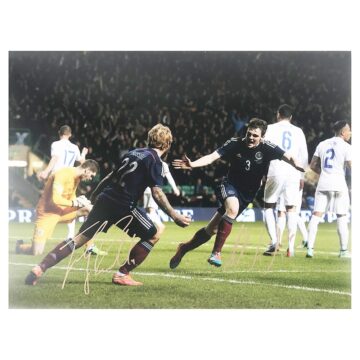 Football is one of the main national sports in Scotland.  The love of football across Scotland is second to none and it is considered to be the most popular sport in the country.  Many young boys and girls grow up with a natural passion for football and a strong loyalty to their local football club and the Scottish national team.

Scotland has the second oldest national Football Association in the world having been founded in 1873, second only to the English FA.  The Scottish Football Association (SFA) is the main organising body for Scottish football and is responsible for the Scotland National Team and is essential to the functioning of football across Scotland.  It is also responsible for the annual Scottish Cup, the oldest national sporting cup in the world.

The Scotland national football team competes in three major tournaments – the FIFA World Cup, UEFA Nations League and the UEFA European Championship.  They play most of their home matches at the national stadium, Hampden Park.  Scotland are the joint oldest national football team in the world, with England, who they contested the first international football match in 1872.  Kenny Dalglish has the most number of international caps for Scotland, making 102 appearances.  He has scored 30 goals for Scotland, equalling the record with another Scottish legend, Denis Law.

Scottish supporters are known as the Tartan Arm and they follow the Scottish team all over the world.  Scotland have qualified for eight FIFA World Cups and two UEFA European Championships.  Although they have achieved some excellent results, they have never got past the group stage of a tournament.  Archie Gemmel scored one of the best World Cup goals of all time in 1978, when Scotland defeated one of the tournament favourites, the Netherlands, by three goals to two.

Our Signed Scotland Football Shirts and Jerseys are 100% authentic. We have shirts that have been signed by the entire current Scotland squad and come with a certificate of authenticity to prove they are genuine.  Browse our collection of signed Scotland football memorabilia, which come with free UK delivery.