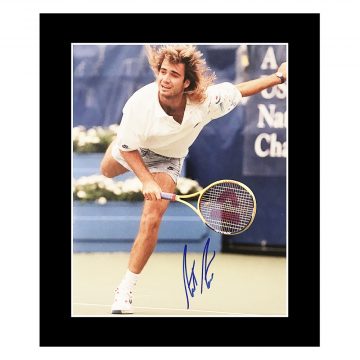 Agassi is one of two men to have won the Career Grand Slam and an Olympic Gold Medal. The tennis superstar has also won 17 ATP Masters Series titles and was a member of the victorious Davis Cup teams in 1990, 1992 and 1995. He reached World No1 in 1995 but sank to as low as No 141 in 1997 due to personal issues. He overcame these issues to return to the No1 spot in 1999 where he stayed for the majority of the time for the next four years.

Andre had a number of tennis rivalries, most notably Pete Sampras. The two players were the most successful tennis players in the 1990s. They played each other 34 times, with Sampras winning 20 of these, against Agassi’s 14 victories. Other notable rivalries included those against Becker, Federer and Michael Chang.

He produced a New York Times Best Seller Autobiography. It won the Best Autobiography at the 2010 British Sports Book Awards. Esquire listed it as one of ‘The 30 Best Sports Books Ever Written.” In the book, he talked candidly about his personal problems and his hatred towards tennis due to the pressure it put on him.