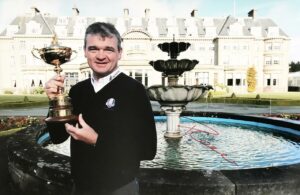 The Ryder Cup 2021 is due to start on Friday 24th September 2021. It is one of the most popular events in the sporting calendar. The tournament runs over the course of the weekend, finishing on the Sunday. It is contested by the best players in Europe against the best players in the USA. You can see Paul Lawrie holding aloft the Ryder Cup trophy here for Europe in 2012.

The Ryder Cup takes place every two years with the venue switching between Europe and the USA each time. The Europeans were victorious last time around in 2018 when it was hosted in France. It is the USA’s turn to host the Ryder Cup 2021 and it will take place at Whistling Straits in Wisconsin. You can watch live coverage on Sky Sports Main Event and Sky Sports Golf if you ware based in the UK.

How does the Ryder Cup Work?

Over the course of the weekend there are 28 matches between the Europeans and the USA. It starts with foursomes and four-balls across Friday and Saturday. It concludes on the Sunday with a full round of singles matches. Each match is worth one point to the victor. If there is a draw both sides earn 0.5. This means each team needs to reach 14.5 points to claim victory. Ths is unless you are the current holders, where 14 points and a draw would be enough.

Each team captain decides who will play in the foursomes and four-balls. The home captain decides the order of the matches. A foursome match involves two pairs competing against each other with players taking turns hitting the ball. A four-ball involves four players playing with their own ball. The best score from each side is counted towards the total.

On Sunday, all players on each team play in the final 12 single matches. Each captain chooses the order each team member will play in. It is often an exciting finale to the tournament. 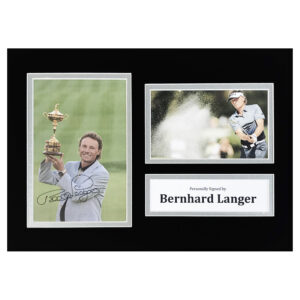 We have a collection of Ryder Cup Signed Memorabilia to choose from including the legendary Bernhard Langer.

Langer is a two-times Masters champion and was one of the top golfers in the world throughout the 1980s and 1990s. The golf legend played in 10 Ryder Cups, winning half of those tournaments. He was also captain of the winning European team in 2004.

10 Interesting Facts About The Ryder Cup