Shop our signed Roger Federer tennis memorabilia with signed shirts, photos, balls, racquets & caps by the great man. Most of our autographs have signing proof. All come with fast worldwide shipping, free UK delivery and a certificate of authenticity! 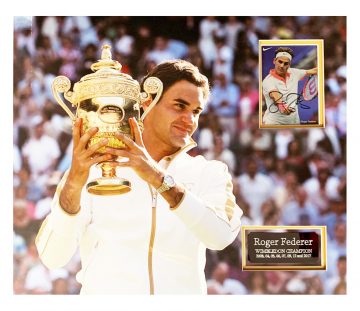 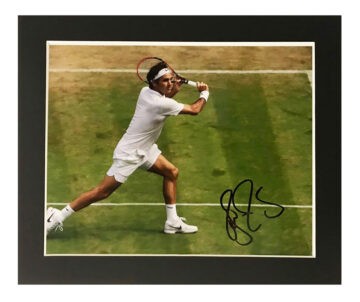 Roger Federer is arguably one of the most successful and prolific professional tennis players in the history of the sport. He has won 20 Grand Slam singles titles – more than any other male player. He has also held the world number one ATP top spot for a record total of 310 weeks. Federer is one of just eight men to have achieved a career Grand Slam – and is unsurprisingly considered by many to be the greatest tennis player of all time.

The Swiss tennis star developed a love for the sport aged just 11. As a child he played a wide variety of sports including badminton and basketball – to which he accredits his remarkable hand-eye coordination and agility.

Federer turned pro in 1998 – but it wasn’t until 2003 that he really came into his own, clinching is first Grand Slam title at Wimbledon. From that moment on he demonstrated excellence and dominance in the game, consolidating with further achievements in 2004 and 2005. By this time he was already breaking records – but not content with the status quo he continued to rise through the ranks to superstardom, completing his most outstanding season in 2006.

Now aged 37, Roger Federer is still going strong. He has won a record eight Wimbledon titles, a joint-record six Australian Open titles and a record five US Open titles, won consecutively. He is one of only eight men to have achieved a career Grand Slam. Even when he isn’t winning, he’s breaking records. Federer has reached a record 30 men’s Grand Slam finals – at one point entering ten in a row.

Although his remarkable playing style yields equally astonishing results, it is also incredibly entertaining to watch. His effortless movement and all-court game make his matches thrilling to watch. Off-court he is known for his bright personality and keen philanthropy.