Shop our signed Rafael Nadal memorabilia with a variety of autographed items from the tennis star! Signed Nadal shirts, balls, racquets and caps, many signed in person with photo proof. Free UK delivery, Certificate of Authenticity and worldwide shipping! 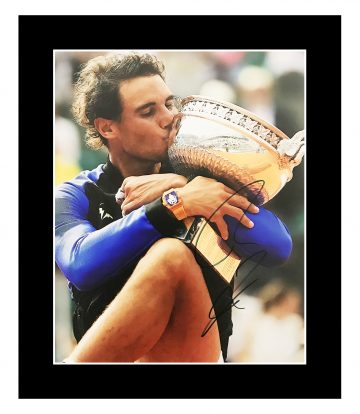 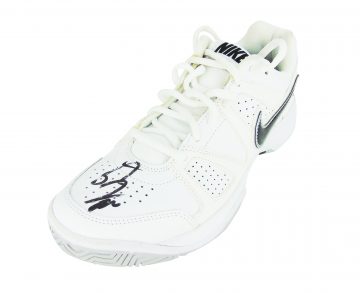 A tennis player who surely needs no introduction – record-breaking Rafael Nadal has turned the world of tennis upside down.

He started playing aged just three, introduced by his uncle Toni Nadal, himself a former professional tennis player. He recognised a natural talent in the young Nadal and vowed to nurture it, training his nephew intensively at home. Nadal also loved football and played full-time alongside tennis – winning an under-12 championship aged just 8 years old. At the age of 12, he won the Spanish and European tennis titles in his age group – and his father finally forced him to choose between the two sports. “I chose tennis. Football had to stop straight away.”

With that, a legend was born. Nadal turned professional at the tender age of 15, breaking records and upsetting key players from the get-go. He has consistently occupied the number one spot in the world ATP rankings, successfully defeating some of the sport’s most prolific players including Andy Murray, Roger Federer and Novak Djokovic. To date he has 17 Grand Slam singles titles to his name, including one Australian Open win, two Wimbledon wins and three US Open triumphs – alongside an incredible eleven French Open successes. He has also won the Davis Cup four times with his national team Spain.

Nadal is also a record-breaker. He has won 57 clay court titles – more than any other player in the Open era. His 81 consecutive wins on clay also make him the player with the longest single surface win streak in the Open since its conception.

Shop 100% genuine signed Rafael Nadal rackets, shirts, balls, caps, visors, and other tennis memorabilia today at Firma Stella. We carefully source each item in our collection from trusted partners or directly from the sports star themselves to ensure true authenticity.