Shop our signed Sales Shark memorabilia including a large collection of autographed items by the squad. Signed Sales rugby shirts, jerseys, rugby balls and photos. Many with signing proof, all with free UK delivery, fast worldwide shipping and certificate of authenticity. 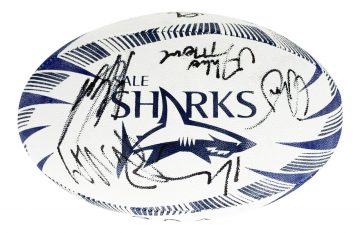 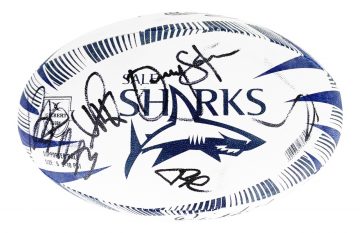 Sale Sharks are based in Manchester.  They are a professional rugby union club who play in the top flight of England Rugby Union, the Premiership Rugby.  They were originally founded in 1861 as Sale Football Club, who are now a distinguished amateur rugby club.  Sale acquired the nickname Sharks in 1999.

Sale Sharks have played their home games in numerous stadiums.  They played at Heywood Road in Sale between 1905 and 2003.  As their popularity increased and a bigger stadium was required, they moved to Edgeley Park, home to Stockport Football Club.  They stayed at Edgeley Park in Stockport until 2012.  In 2012 they moved to the newly built A.J. Bell Stadium in Eccles, also home to the Salford Reds.

They are one of the oldest clubs in English Rugby and they have been one of the leading rugby union clubs in Northern England.  They played a large part of this time as amateurs until becoming professional.  Sale took over 20,000 fans to Twickenham in the 1997 Pilkington Cup Final but lost the match to Leicester 9-3.  Success as professionals did not come straight away.  They were close to relegation from the Premier Division until a local businessman, Brian Kennedy, invested money in the club to give them financial stability.

The true benefit of this investment was realised in the 2001-2002 season when they famously won the Challenge Cup.  This was an amazing achievement and all their hard work, player acquisition investment paid off.  They won it again in the 2004-2005 seasons.

Sale Sharks built on this success they became English Champions for the first time, the following season.  Sale won 16 out of the 22 games to finish two clear games as team leaders.  They then won the 2006 Premiership Title by beating London Wasps in the semi-final, and Leicester Tigers 45-20 in the final.

Their fortunes did change when they moved to Edgeley Park in season 2012-2013 and were nearly relegated.  They did however improve the following season and finished 7th in the Gallagher Premiership for season 2018-2019.