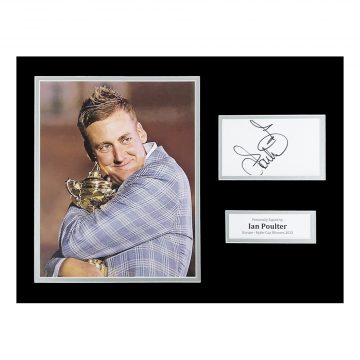 English golf legend Ian Poulter is a name synonymous with golfing success and spectacular wins. He is a member of the world’s top two professional golfing tours – both the PGA and European Tour.

Poulter was born and raised in southern England, taking up the sport at the tender age of four. He developed a love for the game – a passion he inherited from his father, who himself had a single handicap. This influenced both him and his older brother Danny – who is also a professional golfer.

As Poulter was unable to secure a place as a pro at a private club, he took a position as the assistant pro and golf shop manager and a local Golf Club. Despite his eagerness to progress professionally, his boss forced him to pay a full green fee each time he wanted to compete – keeping his progress static at a handicap of 4. Despite this, he soon moved on and eventually turned professional in 1996. He started the season brilliantly, earning a promotion to the European Tour in 1999.

As well as his illustrious professional career and wealth of achievements, Ian Poulter is also renowned for his eccentric and eclectic dress sense. He often wears brightly coloured and mismatched ensembles – making him sure to stand out on the green. His favourite pieces of attire are trousers, which have featured wacky patterns and bold prints over the years.

At Firma Stella we have a fantastic selection of Ian Poulter signed golf shirts, clubs, gloves, balls, caps & photos for you to choose from. Whether you’re a super fan and fancy owning a slice of the action for yourself, or simply want to invest in something tangible – there’s something for everyone. Each item is supplied with a certificate of authenticity, so you can be sure that your investment piece is truly genuine.