Shop for signed Monaco FC memorabilia here, including AS Monaco signed shirts, autographed photo displays, balls & gloves. All with fast worldwide shipping and free UK delivery. Most with a photo of the actual signing as full provenance! 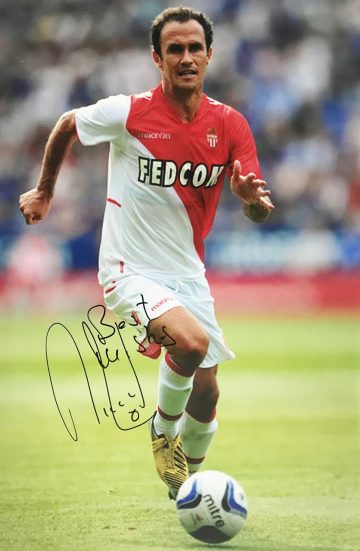 Monaco is widely known as one of the world’s most luxurious and glamorous destinations. The tiny principality is nestled against France’s Mediterranean coast, governed by Prince Albert the 2nd. It’s often associated with flashy cars, billion-dollar properties and slick superyachts – but it’s also home to world-famous football club Association Sportive de Monaco Football Club – most commonly known as AS Monaco FC. Their nickname ‘Les Rouge et Blanc’ refers to their red and white strip, which they have won for over 100 years.

Although they are based in Monaco, the club plays in the French football league system. It was founded in 1919 before developing fully in 1924, unifying various clubs based within Monaco itself and its surrounding areas. In 1933 the French Football Federation invited them to turn professional – and with that, they steadily rose to the first division following promotion in 1953.

Despite their relative infancy, AS Monaco is one of the most successful football clubs in France. They’ve won eight league titles and five Coupe de France trophies over the years. They also reached a respectable second place in the 1992 UEFA Winner’s Cup and the 2004 UEFA Champions League. Their form on the European stage is openly celebrated and in 2014 they knocked out Premier League giants Arsenal, narrowly losing on aggregate to juggernauts Juventus.

Our signed Monaco football memorabilia collection commemorates the club perfectly – featuring signed photographs, signed shirts and accessories autographed by squad players. We pride ourselves on carefully sourcing each item. Every single product in our selection is supplied with a certificate of authenticity. We’re specialists in our field, dealing with valuable and unique memorabilia from sports stars and clubs around the world. Browse our signed Monaco FC  shirts, jerseys, balls & photos today to find your next commemorative piece or investment opportunity.