Signed Felipe Massa F1 memorabilia including autographs, signed Ricciardo visors and photographic displays. Most with photo proof; all with a Certificate of Authenticity, Free UK delivery and fast worldwide shipping! 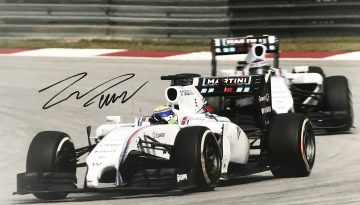 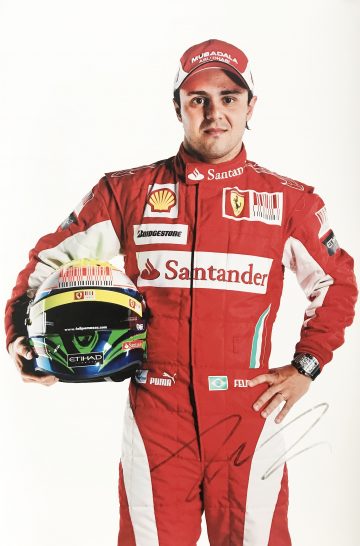 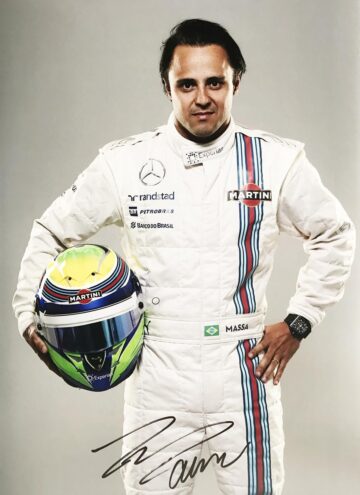 Felipa Massa is a Brazilian Formula One racing driver.  He was born in 1981 in Sao Paulo and is of Italian descent.  His grandparents originate from Foggia in Italy.

He started his career in go-karting, as most racing drivers do.  He started go-karting from the tender age of eight.  He continued in national and regional championships until he was 15.  He moved into Formula Chevrolet and won the title there.  From there he moved to Europe and competed in the Italian Formula Renault series and won the title in 2000 in addition to the European Championship.  The following year he went into Euro Formula 3000 and won the championship.

He was offered a place with Sauber in 2002, the Formula 1 test team.  At the same time he was taking part in the European Touring Car Championship with Alfa Romea.  He raced with Sauber in 2002 and then again between 2004-2005.  In his rookie year he scored 4 championship points with this best position 5th at the Spanish Grand Prix.

Massa joined Ferrari in 2006, having spent time with them in 2003 as a test driver.  He has a good start where he qualified 2nd in Bahrain.  He spun the car in the race unfortunately, narrowly missing the eventual winner of the race, Fernando Alonso.  The driver won two races in his first season with Ferrari and came third in the Driver’s Championship.  He went on to win 3 races in 2007 with a total of 10 podium places.

Felipe Massa had his best season in 2008 where he finished 2nd in the Driver’s Championship.  He recorded six wins and 10 podiums.  As a result, he amassed 97 points, 3 more than the previous season.  He stayed with Ferrari until 2013 when he then joined the William’s team.  Racing four seasons for William, he didn’t record a single win.  Massa left Formula 1 in 2017 and moved over to Stock Car Brasil.  From there he raced in Formula E in 2018-2019 and 2019-2029.