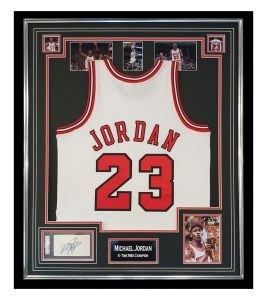 Michael Jordan is widely regarded as the greatest basketball player of all-time.  He is reported to have earned an incredible $1.8 billion in sponsorship deals, plus an additional $90 million in salaries.  We are extremely proud to have two pieces of extremely rare items of signed Michael Jordan memorabilia.  We have a signed framed display of Michael Jordan’s iconic No 23 Chicago Bull vest.

This includes pictures of the 6-times NBA Champion in full flow.  The display comes in a sleek black frame that is ready to hang.  The item comes with an official Upper Deck Certificate.  Upper Deck are world-renowned for validating Michael Jordan signings.  It also comes with an Official Firma Stella Certificate, as all of our products do.  You can view the item here.  This is one of our most exclusive pieces of sporting memorabilia. 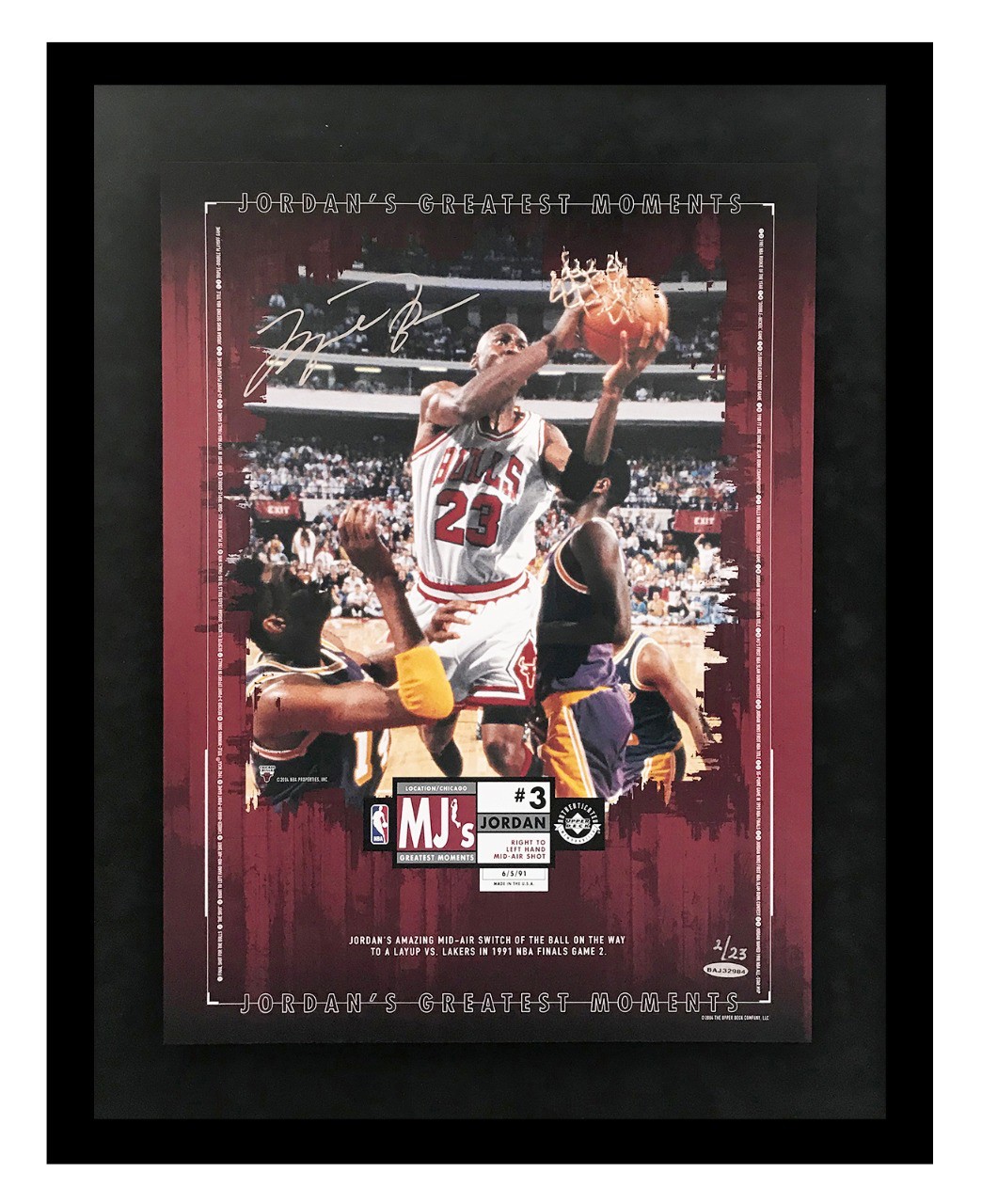 He was born as Michael Jeffrey Jordan in 1963, the son of Deloris and James R. Jordan and one of five children.  He adored his father and shared a special bond with him.  One of those bonds included baseball being both of their first loves.  His older brother Larry was exceptional at Basketball.  Michael idolised his big brother and followed him into the game.

Jordan has been known by a number of names throughout his career including ‘AJ’, ‘Air Jordan’ and ‘His Airness’.  Such was Jordan’s commercial power, Nike produced a hugely successful brand and product range by the name of ‘Air Jordan’.  He was born in the Fort Greene neighbourhood of Brooklyn, New York and moved to North Carolina in 1968.   There he attended Emsley A. Laney High School and excelled playing basketball, baseball and football.

Jordan did initially try out for the varsity basketball team but he was considered too small at 1.80m.  He instead became the star of Laney’s junior varsity team, before shooting up an extra four inches in height.  After earning a spot in the varsity roster he averaged over 25 points in his last two years of high school.  Jordan took a basketball scholarship at the University of North Carolina at Chapel Hill.  He was named Freshman of the year with an average of 13.4 points per game.  He described his winning shot in the 1982 NCAA Championship game against Georgetown, as the major turning point in his career.

Michael Jordan was selected as the third overall pick by the Chicago Bulls in the 1984 NBA Draft.  During his rookie season, he averaged an impressive 28.2 points per game.  He was described as “the phenomenal rookie of the Bulls” and quickly became a fans favourite, even amongst the opposition fans.  He was soon recognised as an NBA league star with his entertaining style of play and his prolific scoring.  He was an all-round player and also gained a solid reputation as one of the league’s best defensive players.

His ability to consistently outleap opponents allowed him to perform slam-dunk after slam-dunk.  This led to his infamous nickname ‘Air Jordan’, resulting in one of Nike’s most lucrative product ranges.

Jordan won his first of six NBA Championships with the Chicago Bulls in 1991.  He then went on to win the following two championships, before retiring in 1993 to play minor league Baseball.  Jordan returned to Basketball in 1995 with the Bulls, winning three more successive championships from 1996-1998.  He retired again in 1999, before returning once again to the NBA in 2001.  This time he played for the Washington Wizards.

As well as winning six NBA Championships he won a number of additional accolades and achievements.  Amongst others, these include: –

It could have been ‘Adidas Air Jordan’ if it wasn’t for Jordan’s mother.  She convinced him to speak to Nike, when Jordan was intent on signing up with Adidas.  Nike offered Jordan a $500,000 a year deal and his own style of shoe, the Air Jordan.  This swayed the deal for Jordan because this was something Adidas were not prepared to do.

Such was the immediate success of the brand, Nike went on to sell $126 million worth of Nike Air Jordan shoes in the first year.  It went on to become the most lucrative athlete endorsement deal ever, with Michael Jordan earning $1.3 billion since 1984.  It helped sky-rocket Nike’s earning potential.  It elevated Nike to one of the biggest and most valuable brands in the world.  In 2010 Forbes claimed the Jordan Brand generated $1 billion in sales for Nike.

A man of many talents, Jordan is acknowledged as one of the most marketed and successful sporting figures in history.  Jordan’s annual income from endorsements is said to earn him over $40 million.  He was the first NBA player to become a billionaire.

He has been a major spokesperson for some of the biggest brands in the world including Coca-Cola, McDonald’s, Gatorade and of course Nike.  He has a shoe named after him, he has been associated with a Looney Tunes cartoon character, he has starred in a film, he has written several books, he owns a Basketball and Baseball team, he owns a number of hugely successful businesses … the list is endless!

Larry Bird labelled him ‘one of a kind’.  He became a champion who helped globalise the NBA with his genius on-court abilities and style of play that appealed to the masses.