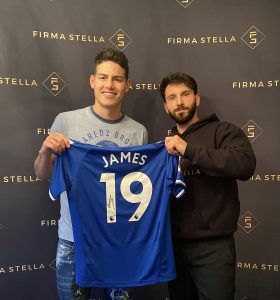 Following on from the signing of Manu Tuilagi, we have teamed up with global football superstar James Rodríguez. James signed memorabilia for Firma Stella in December 2020. Led by entrepreneur Peter Johnson, Firma Stella continues to grow and innovate, adding world-class icons to its roster.

Peter Johnson comments: “We are proud to add a true global football star into the Firma Stella list of sports stars.  James has won most there is to win in European football and also starred at the 2014 FIFA World Cup in Brazil.  He has played for some of the biggest clubs in the world including Real Madrid and Bayern Munich and is the stand out star for the Columbian International team.”

The signing took place in Liverpool on 3rd December 2020. Having lived in Columbia in his 20’s and being fluent in Spanish, Peter Johnson, was able to converse with James in his native language during the signing and speak about his time spent in Columbia. This made the signing even more special. 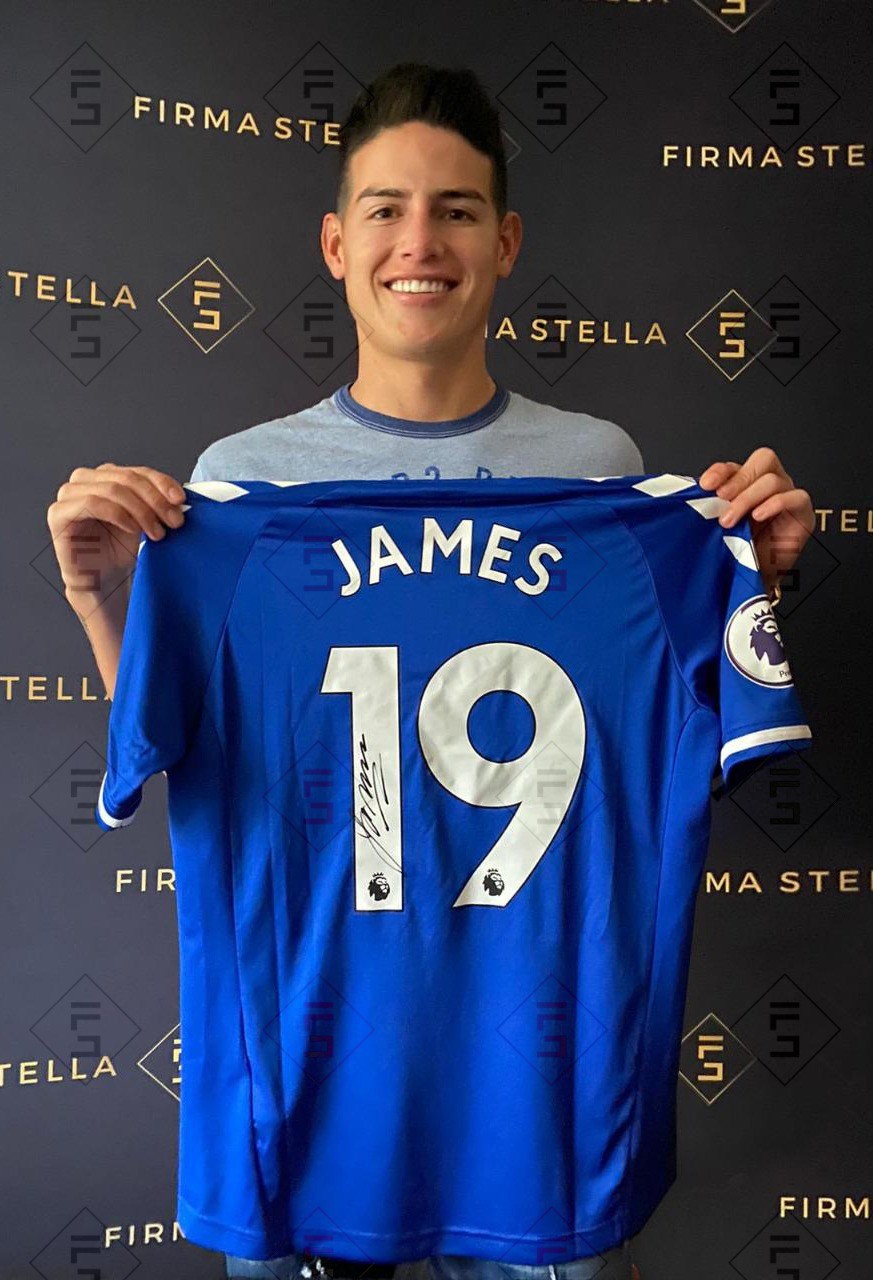 James Rodríguez signed 100’s of items during the signing session. These include Everton shirts, Columbian shirts, Real Madrid shirts, Bayern Munich shirts plus boots, balls and photos.  Many of these items are available on our website which includes photos of the football superstar signing the items.

James is a football god in Columbia. The superstar has 50 million followers on Instagram.  The FIFA World Cup Golden Boot Winner has played for two of the world’s biggest football clubs – Real Madrid and Bayern Munich, as well as starring for Columbia.  The footballing legend has won numerous league titles in different countries and is a multiple UEFA Champions League winner.

The Columbian has won nine league titles across five different countries and two UEFA Champions League titles.  His other medals include the FIFA Club World Cup, UEFA Europa League, UEFA Super Cup and many more.  In fact, James is one of the most decorated players in World Football. 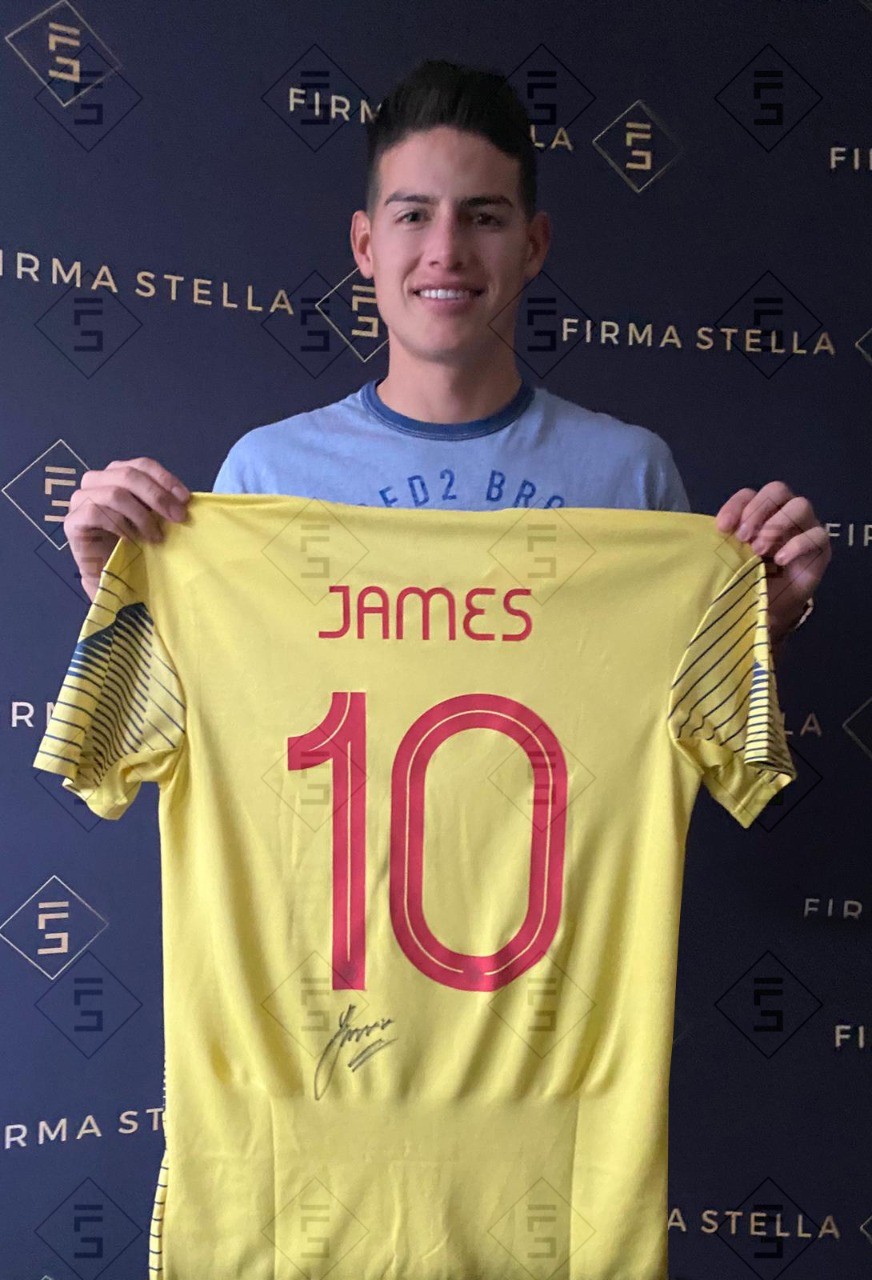 Rodríguez started out at Columbian side Envigado. He played in Argentina before moving to Europe where he played for Porto for three years.  There he won the Primera Liga three times and the UEFA Europa League once.  His performances earned him a move to AS Monaco. The French side paid a transfer fee of €45 million for the Columbian. He went on to star at the 2014 FIFA World Cup in Brazil winning the Golden Boot. He earned the man of the match award in all but one of the games he played in.

His World Cup performances helped him secure a dream move to Real Madrid, his boyhood club. The £64 million transfer fee made him the fourth most expensive transfer in history at the time. James would go to win the UEFA Champions League twice with Real Madrid, La Liga twice plus the UEFA Super and FIFA Club World Cup.

James signed for Bayern Munich on loan in 2017, winning the Bundesliga twice during his time in Germany. English Premier League side Everton made a major coup signing James for £20 million, in 2020. He continues to play in the biggest league in the world during the 2020-21 footballing season. 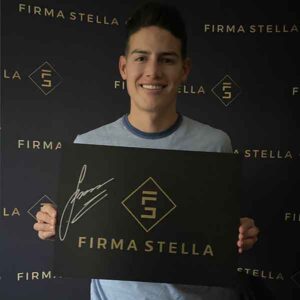 Firma Stella has also teamed up with other high profile players and magazine partners including England and Sale Sharks forward Manu Tuilagi, Rugby World, 442, The Rugby Paper and The Non-League Football Paper. We will be announcing more exclusive signings in 2021.