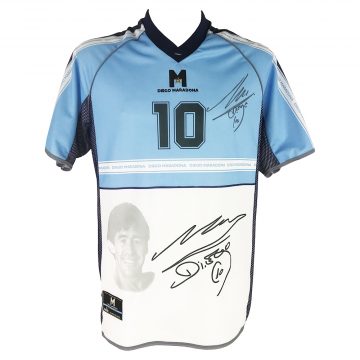 Diego Maradona is an Argentine football legend. He is considered one of the best footballers to have lived. Many believe he is the greatest footballer of all time. He was awarded the FIFA Player of the 20th Century award, along with the Brazilian legend, Pele. Maradona was blessed with superb vision and precise passing and ball control. He was only 5ft 5 inches which gave him a low centre of gravity. This allowed him to dribble past players with ease and grace. Combined with all these creative skills, he possessed an acute eye for goal. He would score fantastic free kicks, long shots and exquisite solo goals. His chunky legs and stature would allow him to brush off As a creative playmaker, a traditional number 10, he was given the nickname of ‘The Golden Boy’.

Maradona was given his first football aged just three and immediately took to the game. He was talent-spotted aged eight by Argentinos Juniors. He played for the youth team and would entertain spectators at half-time at senior games with his football skills and juggling. Maradona made his professional debut for Argentinos Juniors aged just 15. He scored 115 goals in 167 games for the club, before signing for Argentinan giants, Boca Juniors, for $4 million in 1981. Diego would go on to sign for Barcelona the following year for $7.6 million. This was a world-record fee at the time, one of two world record transfers he would be involved in.

His time at Barcelona was to be marked in controversy. He had moments of genius but he also started a mass brawl against Athletic Bilbao in the 1984 Copa del Rey Final. This was to be the last game he played for Barcelona. After 58 games and 38 goals, Maradona was transferred to Napoli for $10.48 million in 1984. He received a warm welcome from 75,000 passionate Napoli fans at the Stadio San Paolo. He helped transform the fortunes of the Italian club. Napoli because the first South Italian team to win Serie A during his time there. He was however to leave the club in disgrace following a drug scandal and his links to the Mafia. Despite this, Napoli renamed their home stadium Stadio Diego Armando Maradona following his death.

The Argentian legend led his country to World Cup glory in 1986 following his infamous ‘hand of god’ against England. He would score two contrasting goals in the quarter-final. The first with his hand and the second which has been voted the greatest goal in the history of the World Cup. Maradona led Argentina to another World Cup Final in 1990, losing to West Germany 1-0. He was sent home in the 1994 World Cup after a failed drug test. Maradona would go on to coach his beloved Argentina in 2008.

The football icon suffered a heart attack and died in 2020, aged 60. He was a national hero with tens of thousands people attended his wake.