Home›News›England World Cup Winners 1966 – Where are they now?

England World Cup Winners 1966 - Where are they now? 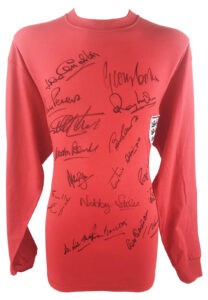 July 30th 1966 remains one of the most important dates for English football.  This was the day England lifted the Football World Cup trophy, named in those days as the Jules Rimet trophy.  England beat West Germany in a 4-2 thriller at Wembley stadium.

The nail-biting match had so many talking points.  Was England’s third goal over the line?  Who was the Russian linesman who awarded the goal?  Was Geoff Hurst’s hattrick the first in a World Cup Final?  Who scored the 89th-minute equaliser for West Germany?  The answers to those questions if you are asking are 1) Yes; 2) Tofiq Bahramov; 3) Yes; 4) Wolfgang Weber.

The final is also remembered for one of the most famous lines from a commentator when Geoff Hurst scored England’s fourth goal to complete his hattrick.  “They think it’s all over … well it is now!”

The class of 1966 remains the only England team to win a World Cup.  We have a number of shirts signed by the World Cup-winning team (including the one featured here).

Following the recent sad passing of Nobby Stiles on October 30th 2020, we take look at the World Cup Winning team and what they are doing now. 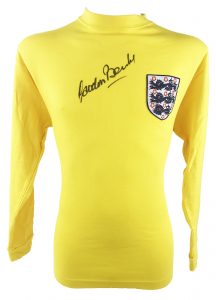 is best remememberd for arguably the best save in football history.  He made a stunning save in the 1970 World Cup in Brazil from Pele, one of the greatest footballers ever to have lived.  Banks won 73 England Caps and played for the majority of his career at Stoke City.  He made 628 club appearances which was cut short by a car crash in 1974 where Bank lost the sight in one eye.  Banks sadly passed away in 2019.

An exceptional defender who played for Fulham.  Cohen had to retire at the age of 29 due to injury.  His nephew Ben Cohen was also a World Cup winner, but with the England rugby team in 2003.  George Cohen opted to sell his winners medal to raise funds.  His former club Fulham purchased the medal which is now displayed at Craven Cottage. 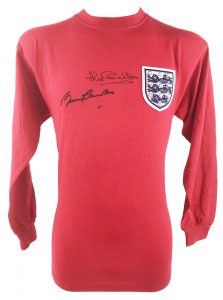 Brother of Bobby Charlton, Jack had a successful playing and managerial career.  He made 629 appearances for Leeds United and played 35 times for England.  Jack managed a number of clubs included Middlesborough, Sheffield Wednesday and Newcastle.  He became an Irish hero when he led Ireland to the last eight of the 1990 World Cup in Italy.  He was appointed an OBE in 1974 and awarded honorary Irish citizenship in 1996.  He passed away in 2020 after battling lymphoma and dementia.

Famed for his toothless smile, Styles played for England 28 times and 392 times for Manchester United.  He later moved to Middlesborough in 1971.  Styles was a youth team coach at Manchester United between 1989 and 1993.  He was actively involved in the development of the class of ’92, including the likes of Beckham, Scholes and the Neville brothers.  He passed away in 2020 after suffering from dementia.

Wilson played for Huddersfield Town, making over 250 appearances for the club.  He later went on to build and manage a successful undertaker’s business until 1997.  He later suffered from Alzheimer’s disease and passed away in 2018.

Arguably the most famous of all of the England winning team.  The captain of the team who is widely acknowledged as England’s best ever centre half.  He has a statue outside Wembley to celebrate English football’s greatest ever day.  He won 108 caps for England and also played for West Ham, Fulham and later in America.  He died from Bowel Cancer in 1993.  His wife later set up the Bobby Moore Fund to raise money for Bowel Cancer.

Ball was the youngest member of the World Cup-winning team, aged just 21.  He played for a number of clubs including Blackpool, Everton and Arsenal where he totalled 800 club appearances.  He later moved into management managing Portsmouth (twice), Southampton and Manchester City.  He died of a heart attack in 2007 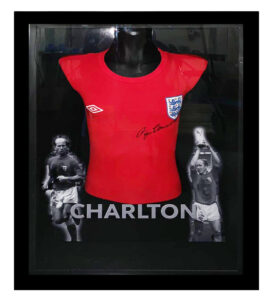 The second of the Charlton brothers, and Jack’s younger brother.  Bobby went on to make 106 appearances for England, survive the Munich air crash and play 606 times for Manchester United’s.  He was knighted in 1994 following his contribution to football.  Charlton had an unsuccessful managerial spell at Preston but remains on Manchester United’s Board of Directors.

Peters won 67 England caps and played for West Ham, Tottenham and Norwich.  He retired from football and moved into the insurance business in 1981.  He had a brief managerial spell at Sheffield United and also sat on Tottenham Hotspur’s Board of Directors.  Peters died in 2019 following Alzheimer’s disease.

Hurst is famous for being the only player to score a hattrick in a World Cup final.  He won 49 caps for England and made over 400 appearances for West Ham.  He had short managerial spells at Telford United, Chelsea and in Kuwait.  He was knighted in 1998 and currently lives in Cheltenham.

Hunt made over 400 appearances for Liverpool and 34 times for England.  He was awarded an MBE in 2000 and currently lives in Warrington.  He held the accolade of being Liverpool’s top scorer until Ian Rush overtook him.

England’s World Cup-winning coach who remained coach until 1974.  Ramsey had to wait until 2009 to be awarded a World Cup posthumously.  All non-playing staff and reserves weren’t awarded a medal in 1966.