Home›News›Cristiano Ronaldo – The Story of a Legend

Cristiano Ronaldo - The Story of a Legend 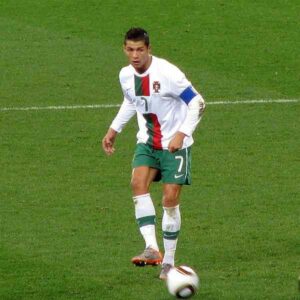 stiano Ronaldo is one of the most recognised faces in the world. He is considered by many as the best player in the world and is one of the greatest footballers of all time. This is reinforced by the many individual honours he has won as a player. The football legend has won an impressive five Ballon d’Or awards and the European Golden Shoe on four occasions. He has collected 32 major cups in his career, with this number increasing all the time. Included in this collection are 5 UEFA Champions League titles, 7 League titles (across three countries), one UEFA European Championship and one UEFA Nations League title.

In celebration to the great man, we have an extensive collection of signed Cristiano Ronaldo signed memorabilia.

Cristiano Ronaldo has changed his style of play numerous times. He is an extremely versatile forward and can play on both wings, or central. Although he is naturally right-footed, he is equally strong with both feet. He regularly scores goals with both feet and is an extremely strong header of the ball too. Along with his height and ability to jump to great heights, many of his goals have also been headers.

He is an expert dribbler of the ball, although he has done less dribbling as he’s got older. As he has matured, he went from being a skinny skilful winger to a muscular physical powerhouse. This enabled him to play more central, allowing him to more easily keep possession of the ball when under pressure. During his time with Real Madrid he was deployed in a more attacking position, often as centre forward. Even when he was played on the wing, he was allowed a free role allowing him to move into the centre.

As he has got older, Ronaldo has adapted his style of play with less off-ball movement, fewer dribbles and passes. He has transitioned well to score the same amount of goals but with fewer touches and opportunities.

Cristiano was born in Madeira and was raised in Santo Antonio, in Portugal. He was the fourth and youngest child, and was born into poverty. His mother has openly admitted she wanted to abort him due to having too many children already, his father’s problem with alcohol and extreme poverty. Her doctor would not allow her to abort. As a result, Ronaldo was raised in an impoverished home where he shared a room with his two sisters and elder brother.

His football skills were recognised at an early age. He played for Andorinha between 1992 and 1995, and Nacional between 1995 and 1997. Aged just 12, Ronaldo signed for Sporting CP in 1997 and moved to Lisbon. He got expelled from school for throwing a chair at the teacher and decided to focus purely on his football career. Soon after, he underwent heart surgery that ultimately saved his football career. He was diagnosed with a racing heart that could have stopped his football career before it started. Fortunately, the surgery was a success and he was back training the same week.

Ronaldo made his full senior debut in 2002 against Braga and a week later scored two goals against Moreirense. Such was his staggering progress, he was the first player to play for the under-16s, under-17s, under-18s, the B team and the 1st team, in the same season.

He was touted out to a number of clubs including Barcelona and Liverpool but it was Alex Ferguson who pulled out all the stops to sign him for Manchester United in 2003. Ferguson was integral to Ronaldo’s development and helped turned him into a world-class player. Ronaldo claimed Ferguson was like a father to him and was one of the most important and influential factors in his career.

Ronaldo became the most expensive teenage signing in English history, with a transfer fee of £12.24 million. His six seasons with Manchester United were incredibly successful for both club and player. During his time with United he won four Premier League titles, one UEFA Champions League (shown here is a Cristiano Ronaldo signed Champions League shirt), one Football League Cups, one FIFA World Cup and one FA Cup. Ronaldo won numerous individual awards, such was his influence on the team. These included the PFA Young Player of the Year, Premier League Golden Boot, Premier League Player of the Season and PFA Players’ Player of the Year.

The football superstar was a firm fan’s favourite, despite his desire to play for Real Madrid. His move was granted 0n the proviso he played one final season for Man United. During the 2008-2009 season, he became United’s first Ballon d’Or winner since the legendary George Best. He also won the FIFA Puskas Award and FIFA World Player of the Year. Ronaldo bowed out with a Premier League winner’s medal.

Ronaldo joined Madrid for a record £80 million in 2009 and was greeted by 80,000+ fans at the Santiago Bernabeu. He made an immediate impression, scoring in his first four league games. He was handed the iconic No7 jersey in 2010. This was a number synonymous with Ronaldo, and is one he was to develop and launch his hugely successful CR7 brand.

Cristiano played nine hugely successful careers at Real Madrid, often competing with Leo Messi for the best player of the world title. Both football superstars have broken the 50-goal barrier a number of times and compete with each for the Ballon d’Or title. Both players have different playing styles, different physiques and different personalities. Messi comes across as more humble and shy whilst Ronaldo is more outgoing, often depicted in the press as arrogant. 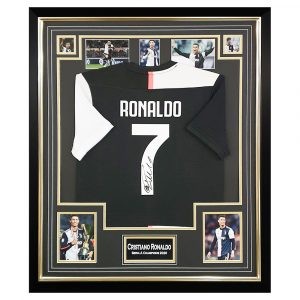 He joined Juventus for 100 million Euros in 2018 and has played three seasons for the Italian giants. The Portuguese star has added two more league titles to his collection, amongst other trophies. We have an exclusive signed Cristiano Ronaldo Juventus shirt in a bespoke frame.

Ronaldo has represented the Portugal national team at all levels. He made his full international debut aged 18 against Kazakhstan. Ronaldo captained Portugal for the first time aged just 22. He was made the permanent captain a year later in 2008, which he retains to this day. He has been a huge influence on the team and has led the team to victory in the UEFA European Championship in 2016 and the UEFA Nations League in 2018-2019.

Ronaldo has earned 179 full caps for his national team, scoring 109 goals along the way. This has made him Portugal’s all-time record goalscorer.

Ronaldo has a unique ability to market himself and is one of the most popular professional athletes in the world. He has over 500 million followers across social media and earnings of £615 million from 2010 to 2019. Ronaldo is ranked second in Forbes list of the most highest-paid athletes of the last decade.

Despite his age, Ronaldo remains one of the biggest football superstars on the planet. Aged 36, he is still in peak physical condition and has a great deal more to offer the world of football.