Christmas Gifts - Give the Gift of a Legend to a Legend

The practise of gift-giving is symbolic of the gifts by the Three Wise Men to baby Jesus. Over time it has become a marketeer’s dream to profit from the art of gift-giving in the lead up to 25th December.

Gift-giving is an ancient tradition that has come to be associated with the Christian feast of Christmas. In Roman times the tradition of giving a gift occurred close to the winter solstice in December. As Christianity become more widespread in Roman times, the custom of gift-giving occurred on New Year’s Day. Around 336CE December 25th became established as the date of Jesus Christ’s birth. The tradition of gift-giving was linked to giving gifts to baby Jesus alongside another story, Saint Nicholas, a 4th century Christian bishop and gift giver. Over time, it slowly became a part of Christmas tradition’s in Christian countries to give gifts on St Nicholas Day, or early in Advent around 6th January.

By the end of the 19th Century, Christmas Eve replaced early December and ultimately moved to the Christmas Day (25th December) in Christian households. The tradition was taken on by retailers at the start of the 20th Century. They directed all marketing efforts for the entire month of December to profit on buying Christmas Gifts.

Give The Gift Of A Legend To A Legend

Surprise that special person in your life with a gift that shows a lot of thought has gone into it. To receive a hand-signed shirt, ball or photo that has been personally hand-signed by your sporting hero, is an amazing feeling. You can be assured the item will be one-of-a-kind. Rarity is something we are proud of. All of our items are unique – one-offs and exclusive to you. We will also gift wrap your chosen item.

The gift will be truly relevant, personal and meaningful for your loved one. Here’s a chance to steal the show at Christmas by showing up with a unique gift. Whilst some of our higher value items find their way into some of the most exclusive collections, many items we sell are given as Christmas presents. We take great pride in receiving photos of ecstatic people receiving a signed shirt from our collection.

Here we take a look at some Christmas gift ideas for men or women. We cover all the major sports in the world so there’s something for everyone! 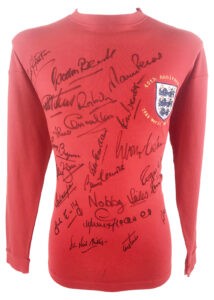 We have a huge collection of football items to choose from. We feature items from every Premier League club, plus all the other major leagues across Europe. We have personally hand-signed items from the best football players to have graced a football pitch. 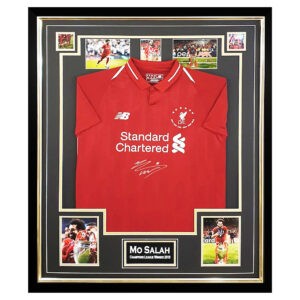 We have a large number of items for the two most successful football clubs in England – Liverpool and Manchester United. This includes a signed Mo Salah Champion’s League shirt featured here.

We have sourced a rare and premium collection, including a number of signed World Cup 1966 Winners shirts. These are signed by the World Cup winning England team. Other items include signed Maradona shirts and collections from some of the best players in the world.

We have formed memorabilia partnerships with world-class legends including Columbian superstar, James Rodriguez. We have over 20 personally hand-signed items from the current Everton midfielder to choose from.

Firma Stella are Official Partners with a number of Rugby legends. This includes the British & Lions Head Coach, Warren Gatland. Warren Gatland is regarded as one of the best coaches in World Rugby.

We have over 50 personally hand-signed items to choose from including a signed shirt from the latest Lion’s tour in South Africa.

We are also partners with current England international Tom Curry. The rugby superstar is a key member of the England team with winning medals for the Six Nations and Autumn Nations Cup and featuring in a World Cup Final. You can see a picture of him during our signing session.

We have over 1,500 rugby items to choose from. These include all rugby international teams featuring the most famous rugby tournaments.

We feature all the major sports plus we have signed memorabilia from your favourites across film, TV and music. This includes signed photo display of the legendary Sean Connery – featured here. The late Sean Connery is considered by many people to have been the best ever Bond.

We have over 750 items in our Cricket collection, including a Ben Stokes range. One of our favourite items is the extremely rare match-worn shirt, worn by cricket legend Ben Stokes. You can see the signed top here, featuring Stoke’s iconic No55 shirt. Other sports we cover include Boxing, Golf, Tennis, F1 and Snooker.

We have memorabilia from virtually every sporting hero, past and present. If you can’t find what you’re looking for, please contact us and we’ll do our best to source an item for you.

Add a Framing Option – Make your item really stand out by adding a framing option. We offer the choice of a classic frame or premium frame. Both framing options will be tailored to the product and will ensure your gift is ready to hang on the wall.

Add a Card – Add a personalised message card to your item. We have a Merry Christmas Card and have a large range of other cards to choose from

Gift Wrap – We will wrap your gift in wrapping to make sure it lands on their doorstep ready to open.