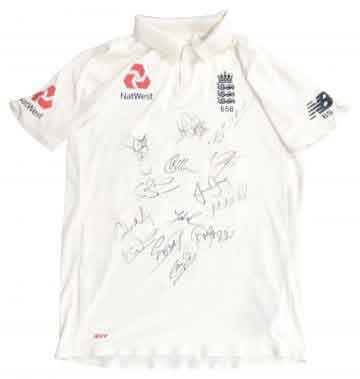 We have an extremely rare, one of a kind, signed match worn shirt.  It is a once in a lifetime opportunity to acquire a truly remarkable collector’s item.  It’s arguably the most exclusive item we’ve had at Firma Stella, and one we’re incredibly proud of.  It’s been worn by Ben Stokes, a true sporting legend.  The jersey was donated to a fan for a charity fundraiser.  Firma Stella purchased the shirt, with monies going to charity.  As with all of our items, we can guarantee 100% authenticity.  It is featured on Ben Stoke’s very own Twitter feed which you can view here, along with the signed Ben Stokes shirt.

The shirt has been personally hand-signed by the 2020 England Cricket Team in black sharpie on the front of the shirt.  The shirt features Stokes name on the back of the shirt, along with his famous No 55.  It also includes the ‘BS initials’ on the sleeves.

It really is a significantly rare item & actually worn by Ben with stains still visible on the shirt.  If you have any questions, please don’t hesitate to contact us.  Here we review Ben Stoke’s career to date and talk about how he is the perfect all-rounder.

An Insight into the Great Man

Benjamin Andrew Stokes was born in Christchurch, New Zealand on 4th June 1991.   29 years later he captained the England Cricket Team for the first time against the West Indies.  Ben’s combative nature and his brilliant, powerful frame, has helped take England to another level.  He is one of the most explosive all-rounders in world cricket and was integral to England’s World Cup victory in 2019.  He stood out in what could be argued as one of the best sporting matches in history.  Stokes used all his strength and talent to score an unbeaten score of 84.  He then went on to bat to help England win a Super Over by the narrowest of margins.

Stoke’s sublime talent was recognised at an early age.  His potential has already been realised, and we feel there is still more to come.  Stoke’s energy, passion and to a certain extent his aggression, both on and off the field, is second to none.  There is never a dull moment and he is a hugely popular figure amongst his teammates and fans.  If you want an enforcer in your team, a man to intimidate the opposition with his physical presence, and a motivator to give your team an extra edge … Ben Stokes is your man.

Players like Stokes come along very rarely.  If you like Cricket, you will be sure to love Ben Stokes.  Here we look into Stoke’s career and how he has developed into one of the finest cricketers of his generation.

Ben migrated with his parents to the North of England at the age of 12.  His father, Gerard, represented New Zealand in international Rugby League.  His son certainly inherited some of his father’s sporting genes.

Stokes ability was recognised at an early age and his move to the UK helped elevate his status.  By the time his parents and brothers moved back to New Zealand in 2013, Ben aged 22 was a regular for Durham.

He signed a 2-year county-contract with Durham aged just 18, making his one-day debut against Surrey in 2009.  Stokes marked the occasion by taking the scalp of the experienced England batsman Mark Ramprakash.  This was only his third delivery in professional cricket.

During the same year, he played in two youth test against Bangladesh U19s.  He scored a half-century and took a number of wickets.  The following year he played in 2010 Under-19 World Cup, scoring a century against the U19 India team.

Stokes made his first-class debut against the Marylebone Cricket Club in Abu Dhabi, 2010, scoring an impressive half-century and taking a wicket.  The same year he made his Championship debut against Essex.  He scored his maiden first-class century at Trent Bridge against Nottinghamshire.  His performances were rewarded with a place in the England Performance Programme.  As part of the programme, he travelled with the England team to Australia for the 2010-2011 Ashes.

Stokes was an integral member of the County Championship winning team in 2013.  He was man of the match at Lord’s in the 2014 Royal London One-Day Cup Final.  Stokes went on to join Melbourne Renegade’s in 2015 before moving to the Indian Premier League in 2017.

He was a man in demand and joined the exciting IPL.  Rising Pune Supergiants signed him for £1.7 million.  Stokes made his maiden T20 century against Gujaret Lions from only 63 balls.  During his stint with the Supergiants he was Man of the Match 3 times in 14 games (a record).  In 2018 he transferred to Rajastan Royals for a record £1.7m.

It was no surprise in 2011 when Stoke was selected into the England International Cricket team.  He was being talked about as the man to fill Freddie Flintoff’s big all-rounder boots.

However, his international career was nearly over before it started.  During his time in the England Development squad he was invited on the Ashes tour in Australia. After breaching curfews, he was sent home for numerous discipline breaches and unprofessional conduct.  Stokes apologised for his unacceptable behaviour and promised to come back stronger.

Stokes made his debut in a One Day International against Ireland in 2011.  He also played against India and New Zealand in the same year.  2012 was a write-off due in large to disciplinary issues, injuries and a general loss of form.  He used this time in rehabilitation to come back an even better player.

During 2013 and 2015 he introduced more aggression into his game.  Stokes hit a century against Australia at the notoriously difficult WACA Ground in Perth.  The century was epitomised with aggressive, yet controlled shots against a strong and relentless Australian attack.

Stokes became the complete player in 2019.   Two performances in particular defined his career.  This is the World Cup Final and the famous test at Headingly where he single-handly won the game for England.

This proved to be a hugely successful World Cup for Stoke.  Not only was he instrumental in helping England win the World Cup with a man of the match performance, Stokes was also named in the ‘Team of the Tournament’ by the ICC.

Stokes produced a number of outstanding performances in the group stages, and then during the knock-out stages to take England to the final.  Such was his influence in the final against New Zealand, he was named man of the match.  He scored an unbeaten 84 including two huge sixes in the final over, ensuring the game was tied.  Stokes then batted in the super-over to help England win the World Cup.  The World Cup Final has been widely recognised as one of the most exciting cricket matches the game has seen.

Although the Ashes series was drawn allowing Australia to retain the urn, the series would be remembered for Stoke’s astonishing performance at the 3rd test in Headingly.  He repeated his World Cup heroics, hitting 135 not out giving England one of their best ever victories.  At the time it kept the Ashes series alive after England were bowled out for 67 in their first innings.  The Innings has been described as the ‘greatest ever played by an Englishman’ and ‘one of the greatest innings of all time.’

Ben has two children with fiance Clare Ratcliffe. He was rewarded an OBE in 2020 for his efforts in the World Cup, and the Ashes series.  This follows being awarded the ‘BBC Sports Personality of the Year’ and ‘Freedom of the Borough of Allerdale’ in 2019.

His career has perhaps been blighted following a street brawl in Bristol in 2017 following the West Indies Test.  Although he was charged with affray, he was later acquitted and publicly thanked for defending a couple who were being harassed.  He missed a large chunk of cricket during 2018 and was charged with bringing the game into disrepute by the ECB.  Following this, his strength of character shone through and it showed his determination to recover, to change and to keep on improving.

What Next for Ben Stokes

Ben Stokes is in the prime of his career.  He has the perfect balance between experience, knowledge of the game and physical capability.  Many people would say he is now the most complete English cricketer to have graced a cricket pitch.  Others would argue this accolade must fall to Sir Ian Botham, Freddie Flintoff or Fred Trueman.  Stokes still has a number of years to play and will no doubt reach even greater heights.

He is vice-captain for England and captained the team for the first time in July, in the absence of Joe Root whose wife was due to give birth.  He was the 81st captain in England’s history.  This is impressive especially considering he was in court only two years ago being charged with affray.  Stokes comments on this as the most defining moment in his career, and how he’s turned his career around since the personal turmoil he went through.

Ben Stokes career to-date has been up and down, with big highs and the lowest of lows.  Let’s hope we see a few more of those big highs.